For vintage and classic car collectors, restorers and enthusiasts, there’s no feeling quite as euphoric as being surrounded by like-minded gearheads who share their passion for steel and rubber. Vintage car shows are the mecca of hundreds of thousands of people from around the world who want to see and show off beautiful – or not – vehicles from yesteryear.

For many folks, getting a classic car to a show isn’t as simple as driving it there. Driving long distances in a vintage car can come with many challenges, with the car’s safety being a major concern. Shipping a vehicle to a show is a common way to bypass the problem and keep the car protected.

At uShip, we ship classic cars every day. With our easy listing tools, you can request quotes from transporters with enclosed trailers, classic car experience, or other factors. Heading to a show soon? Check out uShip’s rates on show car transport before you go – it could save you money, plus the headache of figuring out transport the old fashioned way.

To get you inspired, we’ve put together a list of the best and biggest classic car shows in the US. Check out the list to see if your favorite is featured. The Iola Classic Car Show is a staple on the vintage car show scene. It features 4,200 swap spaces, 2,500 show cars, and over a thousand ‘For Sale’ car corrals. The show offers free admission and free show entry for pre-1942 vehicles. The 2020 event, held annually in Iola, Wisc., will be its 48th year. The 300-acre Iola car show is an event steeped in tradition, a sentimental event filled with nostalgia, friends and a welcoming slogan: “Come home to Iola.” Nestled in the heart of the Carolinas, the Charlotte AutoFair is a world-renowned event that attracts enthusiasts both local and international. In its more than 35-year history, the Charlotte AutoFair has made it its mission to promote the factory-true restoration of vehicles 25-years old and older. The event is presented by the Antique Automobile Car Club of America’s Hornet’s Nest Region. The show sees about 150,000 attendees at each of its biannual events. A large-scale flea market features restoration parts and supplies for “almost any vehicle ever produced.”

No discussion of classic car shows would be complete without a feature on Syracuse Nationals. The show in July, 2020, will be the show’s 21st. Central NY. 90,000 people. 8000 cars and trucks. The 2019 event drew in more than $75K in donations to charities like the Alzheimer’s Association and Ronald McDonald House Charities. The beloved Rockability Roundup features more than 400 cars in non-restored condition – a showcase of vehicles that owners want to showcase “as-is,” rather than after restoration. These unique vehicles are a highlight for many visitors. The fan-favorite was named USA Today’s Best Car Show three years in a row. Held annually at the Minnesota State Fairgrounds in St. Paul by the Minnesota Street Rod Association, Back to the 50s has been around for 47 years. The first-ever iteration saw 150 cars – today’s event hosts around 12,000 and boasts celebrity guests like hot rod extraordinaire Jay Leno. This massive event showcases all types of classic cars — from grungy rat rods to expertly restored pre-war relics. It’s a can’t-miss event for anyone who calls themselves a classic car enthusiast. Hot August Nights was born as an event to celebrate the nostalgia of the 50s and 60s – the cars came later. At the inaugural event, a small number of show cars were present. Their popularity encouraged owners, offering a proud moment and catalyzing the event’s new identity as a vintage car show. One of the most structured and well-run shows out there, this event attracts a whopping 500,000 spectators, with more than 5,000 cars on display, and features drag races, the ROW Show n’ Shine competition and a sister show, the Vintage Trailer Revival. This show takes place in Hershey, Pennsylvania and places a heavy focus on its associated charities. The crowning glory of the show comes on day one, when collectors and enthusiasts take part in The Grand Ascent. The traditional hill climb sees drivers of some of the world’s most well-known cars race, a two-day trek up a back road to The Hotel Hershey. The Elegance at Hershey is a high-end show with participants bringing high-end mid-century race and collector cars from around the world. The Elegance event, described as “a genteel garden party featuring the world’s finest collector cars,” is a crowd favorite and marks the show’s conclusion. 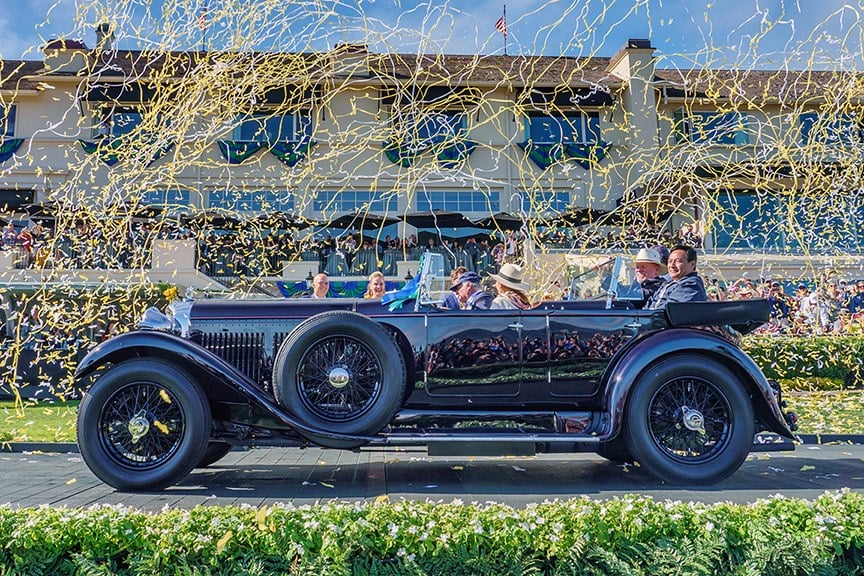 The world-renowned Pebble Beach plays host to this show – a staple on the show car scene – and it’s not to be missed. A crowd outfitted in sunhats, pastels, bow-ties and driving gloves, it’s aptly named for its sophisticated environment. The 2020 event will mark Concours d’Elegance’s 70th year. Best-in-show winners are often Rolls Royces from the 20s, 70-year-old Ferarris, or Aston Martins of yesteryear. This event is the premiere destination for the true vintage enthusiast thanks both to its notoriety and tradition. Can’t make it in person? You can livestream the entire event.

Heading to a car show with your vehicle? Learn more about shipping it with our helpful guides: