Two Vans, a Cat and a Cargo Trailer: How AceFlys Handcrafted His Dream Job

Dale Goldberg isn’t a transporter any of his customers will ever forget. Traveling the country with his trusty sidekick – a cat named Cue – Dale operates as AceFlys, a small transport operation, born of a simple dream: a job that pays him to travel.

“I call myself a VIP door-to-door service provider. I am pretty successful at getting contracts by selling myself and communicating with shippers,” Dale says. It all started as a way to pay for his kids’ college. After living in the world of corporate logistics for five years, Dale found himself burned out, and walked away from daily contracts and the team of employees he managed. That was more than two years ago, and he’s been riding the independent shipping wave ever since, thanks in part to uShip. His lean operation is made up of two Sprinter vans and a cargo trailer. Focused on smaller items that keep the job to a one-man task, Dale primarily ships motorcycles, trailers, medical equipment, and pets. When trying to figure out how to fulfill his wish of being able to travel while still making a living, Dale found a few obstacles with traditional “travel jobs.”

“I found with most of those jobs, after the travel you actually have to work! uShip is the opposite – I get to enjoy the travel, and most of the work is just loading and unloading.”

Dale’s routes are mostly concentrated on the east coast. He’s cruised through every major city from Connecticut to Florida. He takes the time to embrace the places his shipments take him. Like Miami – where he made a delivery and then headed to the Keys. Visiting friends and family along the way, Dale camps in his van, citing a distaste for hotels.

When asked what the most memorable item he’s transported is, Dale says he’s not sure there is one. “It’s more the people I meet than the items. It’s actually really interesting – they all have stories, and the shipments do too.”

No matter who Dale is meeting or where he’s going, Cue is by his side. She’s a fan of the road life. Since she was a kitten, she’s seen everywhere Dale has. “She easily adapts to different environments. It’s also been my hobby to challenge her. She’s leash and carrying bag trained, and also registered as a service animal, so I can take her anywhere.”

If this seems like a familiar story, you might be remembering another memorable uShip service provider. Roy Garber of Shipping Wars fame also relied on the company of a well-traveled cat for his nationwide delivery runs. Muffy the cat was frequently featured on the show, and even made a few appearances around the uShip office. Seems like feline friends may just make the best travel companions after all. Priding himself on the positive feedback he gets from customers, Dale is described as an exceptional communicator with a lot of energy. From motorcycles to puppies, Dale’s profile is full of shippers who’ve used his services and can’t get enough of his detailed updates and friendly demeanor.

One shipper said, “We could not have asked for a better person to transport our cats. Dale ‘customized’ their cage so they had more room and were more comfortable for the trip and kept us informed of his status. The cats were even included on his cat’s Facebook page (Cue the Cat).”

It’s service providers like Dale – who go above and beyond the simple task of transporting stuff – that make uShip the world’s leading shipping marketplace. 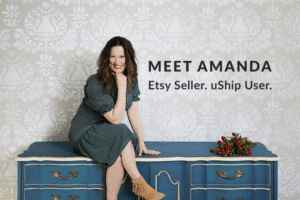